You are here: Home » Events » Fantasy Football » Continuing Our Mission 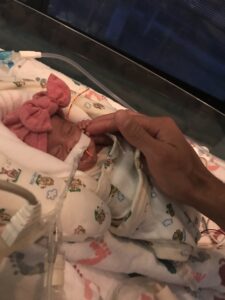 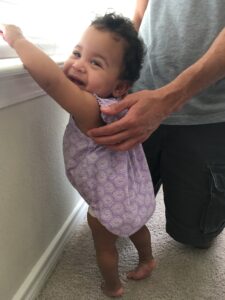 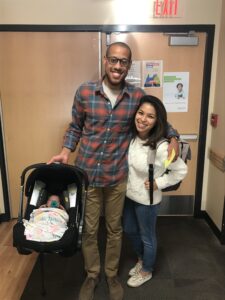 “It’s been quite the year.”

For millions of people, this statement encapsulates all of the tumultuous changes that have occurred in 2020. Social distancing, quarantine, and working from home have slowly transitioned into the new norm for most in the United States. However, there are some families who have experienced the challenges of quarantine even before the arrival of COVID-19.

One such example is Holland Brookins. Born at 27-weeks-gestation as a micro-preemie due to severe Intrauterine Growth Restriction (IUGR), she weighed only 1lb 7oz at birth. During her 4+ month NICU stay, Holland spent months intubated and on oxygen. Unable to drink on her own, she required a feeding tube for her entire hospital stay. In addition, she received a diagnosis of retinopathy of prematurity (ROP) and suffered a grade II brain bleed. She underwent heart surgery, had pneumonia twice, and suffered from a collapsed lung for an extended period of time.

Unfortunately, things took another turn for the worse when Holland spent a week diagnosed with severe periventricular leukomalacia (PVL), an injury to the white matter of the brain. But in a fortunate miracle that defied medical explanation, doctors reported that her brain scans began to look completely normal only a week after the PVL diagnosis. As a precaution, medical professionals continued to administer weekly head ultrasounds to monitor any brain bleeding.

After a stay of 129 days in the NICU unit of the hospital, Holland came home. As first-time parents, Destiny and Teddy felt nervous and concerned about Holland’s care and development. They immediately enrolled their daughter into The Warren Center’s Early Childhood Intervention program. Although she was about four months old, her adjusted age was only one month. She demonstrated delays in adaptive, social, motor, and cognition skills.

The Warren Center began working one-on-one with Holland. Her therapist, Nora Chavez, cleared the runway for Holland’s development to take off. In the beginning, Holland struggled to open her fists, roll to her side, and hold her head up. It was hard for Holland to track objects or turn her head from side to side, and she made very few sounds (beyond crying for her bottle).

Before Holland’s therapy could make any further progress, the unexpected COVID-19 pandemic hit the United States. Doctors considered Holland immunocompromised after being discharged from the NICU and the family had already been quarantined for flu season since their return home in October – conducting in-home therapy in a controlled environment.

After nearly five months of in-person therapy, COVID-19 meant that one-on-one in-person therapy services were suddenly no longer an option. Fortunately, The Warren Center transitioned Holland to teletherapy without delay. Holland’s therapy schedule didn’t miss a beat and allowed her to maintain the consistency necessary for her development and continued progress.

Furthermore, laptop time with her therapist Nora became an exciting part of Holland’s routine. From check-ins on weekly therapy assignments, to answering questions, to celebrating crucial developmental milestones, Nora has been able to connect with the parents without disruption.

Holland now holds objects, rolls over, holds her bottle, scoots, crawls, climbs, and babbles like a chatterbox. Even more, the therapy sessions have given Holland’s parents peace of mind, increased their confidence, and provided the resources and knowledge that enables their daughter to thrive.

The Warren Center will continue to provide professional evaluations, therapy services, and support to children impacted by developmental delays and disabilities. While it has been quite a year, Holland is a tremendous example of how your support continues to help children reach their full potential.