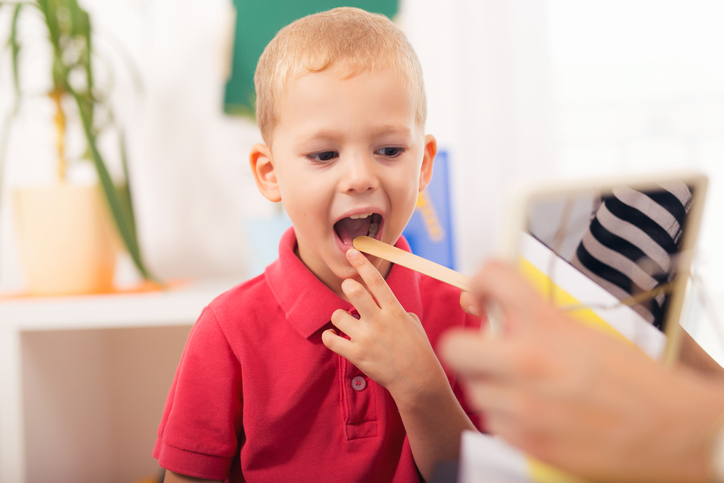 Apraxia is an oral motor speech disorder that makes it harder for children to speak. Officially known as childhood apraxia of speech or CAS, this disorder occurs when the brain and nervous system have trouble coordinating plans for speech movements.

It is important to note that children with apraxia usually understand language and know what they would like to say. Moreover, the oral-motor and speech muscles are not weak in and of themselves. Rather, the brain and nervous system have a hard time directing the oral motions needed to turn sounds into syllables, words into sentences, and so on.

What Causes Childhood Apraxia of Speech?

Childhood apraxia of speech can have a number of possible causes. Doctors and researchers have not yet identified one possible cause or difference in brain structure that results in apraxia. Instead, CAS primarily occurs when there is a problem when the brain sending signals to mouth muscles in order to produce speech and communication directly. Because of this, a child cannot simply “outgrow” CAS and would need speech therapy to overcome challenges associated with the disorder.

In addition, childhood apraxia often co-occurs with a larger disorder or condition, including

Other possible risk factors include differences in the FOXP2 gene or children with family members who also have communication disorders.

What are some of the Signs or Symptoms of Childhood Apraxia of Speech?

Childhood apraxia of speech symptoms may vary based on age and concurrent conditions. Possible signs that are noticeable when a child is 18 months and two years include the following:

As a child’s overall language development progresses, signs and symptoms of CAS can become more pronounced. Signs that indicate apraxia between ages two and four include the following:

Children with childhood apraxia of speech may demonstrate signs sometimes associated with other disorders, such as:

How Does Childhood Apraxia of Speech Different From a Speech Delay or Speech Sound Disorder?

Since it is far too easy to confuse childhood apraxia of speech (CAS) with other disorders, parents or caregivers should contact a licensed speech-language pathologist (SLP) for the appropriate diagnosis of symptoms. Treatment for CAS may differ from other disorders, so a misdiagnosis can, unfortunately, result in reduced therapy gains.

What is the Treatment for Childhood Apraxia of Speech?

Treatment for CAS is intensive and focuses largely on speech-motor planning and programming. This may include sound-sequence drills, sound-motor exercises, and adapted cueing. In addition to paced learning, the SLP might request that the parent or caregiver engage in co-production (saying the word at the same time). Depending on severity, a professional might also suggest orofacial myofunctional therapy and visual prompts for restructuring oral muscular phonetic targets therapy (known as the PROMPT system). As you might imagine, a therapy program can take years to complete, so accurate diagnosis is critical for best results.

Although childhood apraxia of speech differs from more commonly understood speech disorders, parents and caregivers should not feel discourage. Studies have found that while researchers do not know the single cause of CAS, most children with CAS can achieve verbal communication after undergoing intensive therapy. If you have any questions about childhood apraxia of speech, contact The Warren Center for more information.