A heart defect did not stop her “I can” spirit 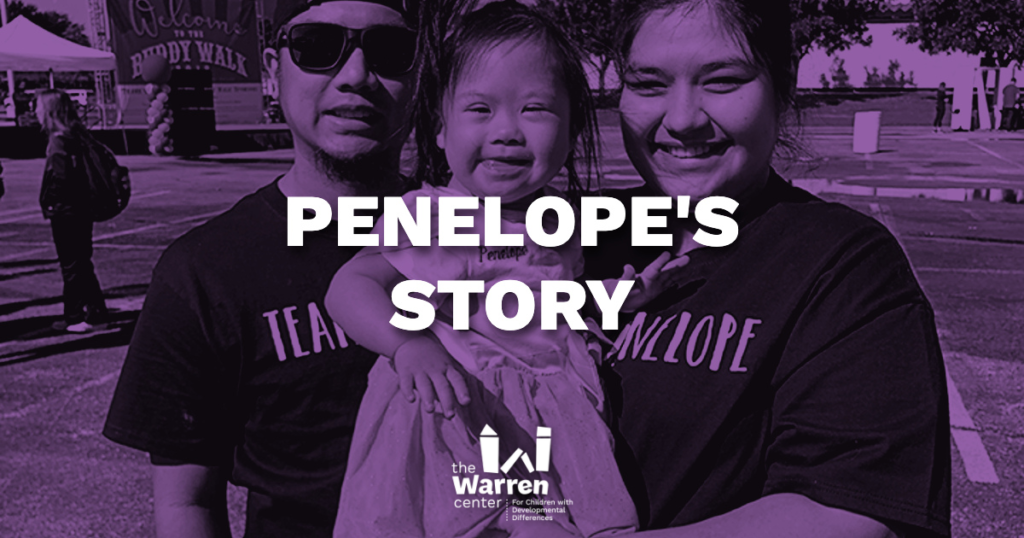 Meet Penelope, an easygoing toddler who loves to dance to music and spend time with her parents, Katie and Christian. When faced with the unexpected diagnosis of Down Syndrome, however, this family learned that even the most easygoing and close-knit families can benefit from access to a strong support system through The Warren Center.

After learning Penelope, had Down Syndrome only one week after discovering she was pregnant with Penelope in the first place, Katie initially did not know what to expect.  Katie barely had time to adapt to the news of having a Down Syndrome child before giving birth to Penelope 4-5 weeks prematurely.  Within minutes, medical personnel hooked Penelope up to oxygen and rushed the newborn to the neonatal intensive care unit where Katie and Christian did not see Penelope for the first time until five hours later.

The new parents soon learned that Penelope also had a heart condition common in Down Syndrome children that would require surgery at six months old.  Penelope could not move or roll over following the surgery, and she needed special medication to prevent her heart from flooding. The procedure also included AB canal repair and cardiological monitoring since Penelope’s heart had an extra valve.

Penelope’s parents soon observed an increase in Penelope’s motivation to try new things. “Before we started with The Warren Center, she didn’t really seem like she was interested in doing anything,” Katie explained. “She was smaller but of course they still have that attention span. And now it seems like every time she sees a therapist, she’s like excited and she shows that she’s ready.”  Penelope has also progressed in the areas of physical, speech, and social skills therapy (SST) and consistently puts learned skills to use. “She is showing more signs of wanting to do things and she’s excited to learn those new things and put those skills in action,” Katie said.

Penelope demonstrates newfound drive each time she receives therapy services. For example, in describing the positive impact of physical therapy, Katie explained, “She’s actually started to try to stand and walk on her own. Well she sees everybody twice a month but even on her own she’s like, ‘Okay I can do this,’ and she kind of looks at it, looks at her situation and she at least tries, which is a big thing because before she didn’t really try anything.”

Katie and Christian are also happy that the therapists genuinely care about Penelope instead of just going through the motions. “They don’t just tell us what we want to hear. They give us the facts of it. And I feel like if we’re not comfortable with something, they kind of adjust it to where we understand, but at the same time it’s on a better basis for all of us,” Katie said.

Through the Warren Center, Katie and Christian learned much more about their daughter’s condition than they could have imagined. “Initially we thought okay Down syndrome is just a physical thing,” Katie explained. “We’ve asked a lot of questions between her therapists and we’ve learned quite a bit about it.”