What to Do When Your Child is having a Temper Tantrum 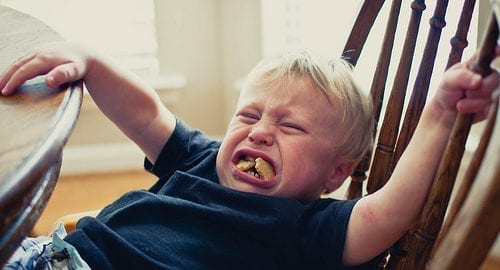 What is a Temper Tantrum?

A temper tantrum is an emotional outburst or disruptive episode that children use to express anger, frustration or unmet needs and desires. Tantrums can range in extremes from stubbornness and defiance to crying, screaming, throwing things, falling, or banging one’s head on the floor. Children use temper tantrums to express emotions before learning to articulate them in socially acceptable ways.

It is important to understand that temper tantrums are normal occurrences in early childhood development. However, tantrums can seem noticeably more overwhelming during the second year of life (thereby earning the nickname “terrible twos”). Temper tantrums can also appear more pronounced in children with specific diagnoses (such as behavioral disorder with non-verbal components) since these children can have a harder time expressing their articulating their specific wants and needs.

In addition to expected temper tantrums, some children may have what doctors call disruptive mood dysregulation disorder (DMDD). Children with DMDD may demonstrate frequent outbursts or irritability far beyond the developmentally expected age. These episodes are a form of dysregulation (the inability to express emotions in an age-appropriate way). With the right preparation, parents can help make tantrums and DMDD.

Temper tantrums are an expected part of early childhood development. Episodes typically take place when the child is between the ages of one and four. But while temper tantrums are common, there are certain circumstances that may trigger these episodes, including the following:

What Should I Do When My Child is having a Temper Tantrum?

Since temper tantrums can feel quite disruptive, the first step is to remain calm. (It is okay pretend or even take a moment for yourself if you need it.) Do not lecture, argue, or respond with threats or anger since these reactions are likely to make the tantrum worse.

Determine Why the Child is Upset

The cause of the tantrum often determines how the parent should handle it. For example, if a child is hungry or sleepy, it is probably time for a snack or a nap. However, if a child wants attention or is upset with the environment, it is usually best to use a gentle distraction (such as a funny face or book) or to move the child to a quieter, calmer environment.

Instead of showing anger or trying to “reason” with your child, acknowledge why he or she is upset.  For example, you might acknowledge, “It’s very upsetting when the juice cup tips over, isn’t it?” Showing your child that you understand (and using a soothing voice while doing it) gives your child the opportunity to process and reset emotions.  Using words to label and identify emotions (“I can tell you are upset. Your face is red. You are crying”) can help children gradually learn vocabulary words to express themselves instead of throwing tantrums.

Remove potentially dangerous objects out of the child’s path or change the environment without giving into the tantrum. For example, if your child throws a tantrum due to not wanting to leave the bathtub, it is better to pull the plug and let the water out rather than leaving the child in an endangering situation. Similarly, children who throw tantrums in public should be removed to a quieter place to calm down.

Use Time-Outs When Necessary

If a tantrum occurs because a child repeats dangerous or forbidden behavior after being told to stop, use a time-out. With immediate safety hazards, it is okay to hold the child calmly bu firmly for several minutes. The key is to be consistent. If the time-out is for a tantrum that includes negative behavior (such as hitting another child), it is important to explain the time-out and set a reasonable time limit. The child can then learn to apologize (to the playmate, etc) after calming down.

Praise Your Child for Calming Down

It is important to praise children once they have regained control. This reinforces positive behavior and choices. The child then associates good behavior with reward. For example, you can specifically say, “You did a good job using your indoor voice and not shouting at the store.” This gradually helps children adapt acceptable behaviors.

Do Not Bribe Your Child or Give in to the Tantrum

Bribing or otherwise giving in to the tantrum teaches children that tantrums are effective for getting their way. Even worse, some children may adopt tantrums as a way to receive the bribes (“rewards”). It is better to wait out the tantrum in private environments or move the child to a quieter place if the tantrum is occurring in a public or potentially unsafe environment. This teaches the child that resolution can only occur after calming and processing their emotions.

Do Not Dismiss or Downplay Your Child’s Emotions

It is important not to invalidate your child’s feelings. This may increase the likelihood of tantrums as the child attempts to receive acknowledgement. Examples of downplaying emotions include laughing at the outburst, using sarcasm, or making insensitive comments (“It’s only X,” “There is nothing to be so upset about,” “Don’t be silly”). Instead, acknowledge the child’s emotions soothingly so that you can approach a resolution.

How Can I Reduce the Likelihood of Temper Tantrums?

Although temper tantrums are common occurrences in early childhood development, there are steps you can take to increase the frequency of occurrences:

Keep in mind that it is okay to seek help if your child is having a hard time learning self-regulation skills. Many parents become concerned about tantrums that involve head slamming, breath holding, or leads to headaches, injury, or destruction of property. If you need help with managing tantrums or suspect your child may have DMDD, contact The Warren Center.