Juan M.’s Story: The Joy of Apples and Bananas

You are here: Home » Juan M.’s Story: The Joy of Apples and Bananas 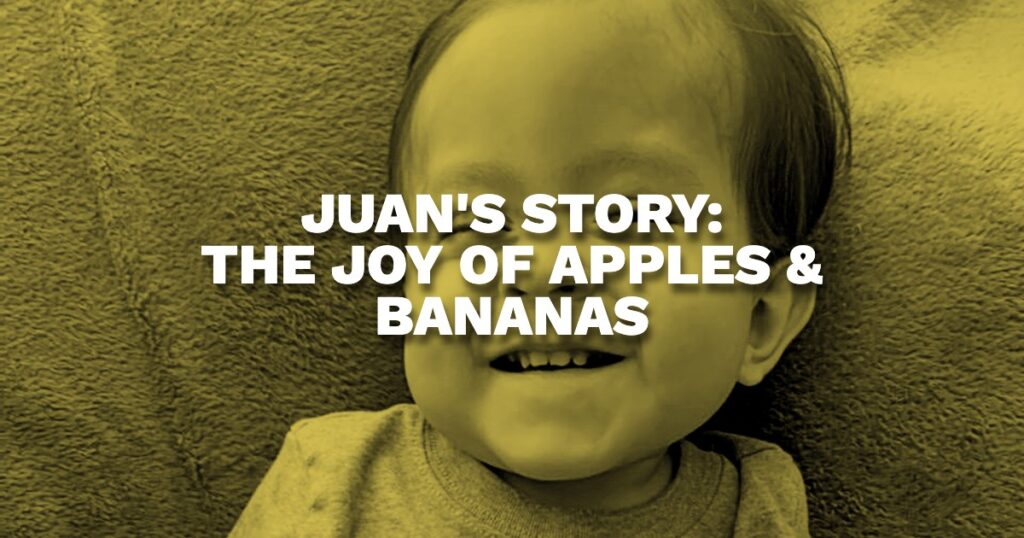 Ask any group of children about one of their favorite nursery rhymes, and you are likely to hear the song “Apples and Bananas” among them. Most children enjoy reciting the words as well as eating apples and bananas as snacks. For the family of Juan Martinez, however, these lyrics roused anxiety since Juan struggled to say the words of the song or even consume these snacks. Despite his best attempts at communicating, Juan’s challenges left him extremely frustrated, and his mother began to worry about his skills and progress. Fortunately, Juan’s family discovered a powerful ally in the expertise of The Warren Center.

The beginning of Juan’s life proved that he was a fighter from the start. Born with spina bifida, Juan underwent brain surgery shortly after birth. He also demonstrated involuntary eye movement as well as hearing loss in one ear. After his release from the hospital, Juan’s mother, Destiney walked away from her career to become his full-time caregiver.

In addition to Juan showing significant delays in his motor skills, he also showed significant delays in both verbalizing and understanding language. Although he readily attempted to communicate verbally with the clinician and tried to respond to cues, he produced unintelligible vocalizations with no imitation of recognizable speech sounds. The clinician also performed a swallow study that revealed that thin liquids would go down the wrong tube and into his lungs. At the start of therapy, Juan could only consume thick Pediasure using a baby bottle with a “Level 1, Slow” nipple. He could not eat food.

Committed to help Juan consume whole foods, his therapists introduced baby food on a small spoon. Unfortunately, Juan would become frustrated, cry, recoil, and turn his head away. The therapists then shifted gears and decided to empower Juan by letting him hold the spoon. This allowed Juan to become familiar with food smells and its texture.

Within a few months, Juan began eating pureed bananas. And just like the beloved childhood song, Juan discovered that he liked them. Accompanying his snack with liquids happened more slowly, his therapists experimented with various cups, and straws to determine which items suited Juan best. His therapists also showed Juan’s mother how to implement new strategies and slowly introduce flavors for improved progress.

Juan can now drink water from a bottle. He likes to eat pureed apples, bananas, pumpkins, sweet potatoes, carrots, and prunes. Like many children, he also enjoys mixing things up with French fries and munching on beef jerky. Instead of turning his head in aversion to food, Juan is open to trying new textures and tastes. His mother and father have slowly reduced the amount of Pediasure in his diet, and Juan loves to verbally request a “taco” or “French fry!”

In addition to his favorite food words, Juan now has over 100 words in his active vocabulary and can imitate most of the words his parents say. He uses phrases and is a delightfully social and sweet child who loves being the center of attention. Happy to engage and talk non-stop during sessions, he can now eat apples and bananas to his heart’s content during therapy. His parents are thrilled and grateful that Juan can now experience the joys of childhood all thanks to The Warren Center.