You are here: Home » Meet Juan 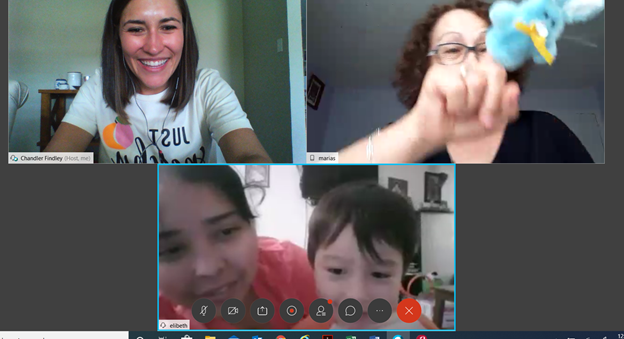 Sara smiled to herself, knowing that her son, Juan, would enjoy the bubble bath she had prepared. When Sara heard no answer, she hurried to his play area only to hear her son repetitively babbling numbers one to four.

Dismayed, Sara tried another tactic to get her child to respond.

“Juan, would you like to have your snack first?” Sara hoped the subject change would capture his attention and engagement. Unfortunately, not only did Juan fail to respond, he continued with the repetitive babbling.

Sara’s eyes filled with tears. A torrent of questions flooded her mind. Is this normal behavior from a two-year-old? Does my son have a hearing impairment I do not know about? Is he just uninterested in social interaction? What if I can’t help him?

Sara decided to contact The Warren Center. To her relief, The Warren Center came well equipped to provide Juan with early childhood intervention (ECI) services to address his receptive and expressive language delays. Prior to receiving services, Juan would not consistently follow directions. He also had trouble identifying objects and focusing on activities. Juan did not use words to communicate or respond to instructions she gave during daily routines.

The Warren Center began to provide speech therapy services that enlisted both a speech therapist and bilingual translator to work with Juan and his mother to identify areas of need and to implement strategies to improve his language skills. The Warren Center also enrolled Juan into their Koala Club social and language group to enhance his social communication skills with other children. During his time at Koala Club, Sara was able to interact with the other parents of children in the group in a supportive setting moderated by one of The Warren Center’s social workers.

Juan’s results have been remarkable. He became interactive with the other children and began interacting more with the speech-language pathologist (SLP) and translator during sessions. He became attentive during activities for longer periods and learned to take multiple back-and-forth turns with his mother.

In addition, Sara followed The Warren Center’s instructions to use play activities to help Juan follow daily routines at home. Because of these strategies provided from the speech therapy sessions, Juan has begun to understand and follow directions. He has also started to imitate more words and has learned to use words to make requests, label items, and comment on objects that he sees. Sara is thrilled to see her son Juan’s marked progress and feels excited to help him develop his language skills further.

Juan’s sessions transitioned smoothly into telehealth sessions during the COVID-19 statewide social distancing mandates. At each online session his speech-language pathologist, translator, and mom Sara all connected to help Juan reach his outlined goals. Each week, Sara reports new gains that Juan has made in communication.

Before reaching out to The Warren Center, Sara worried whether Juan’s condition had rendered him unreachable. However, thanks to the diligence of The Warren Center team, Sara now sees that Juan’s life has opened to a new world of possibilities with a bright future ahead.