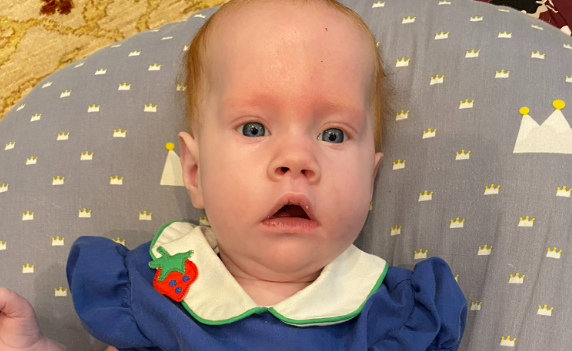 ‘She got stronger every single day’: Siena inspires others with her determination

From one chapter of not knowing if their child would make it due to myotonic muscular dystrophy, to the next chapter of watching their precious baby grow and prevail, Baby Siena’s parents have a lot to be proud of.

Siena recently celebrated a big milestone – her first birthday. Siena, who is the youngest of five, was diagnosed with myotonic muscular dystrophy, which is a condition her parents, Meghan and Daniel, said they did not know she was going to have.

Siena was born with low muscle tone and had some breathing issues, so she went straight to the NICU so doctors could figure out what was going on. Right away, her mom pumped milk for the baby and provided skin-to-skin contact, but said it was initially “very difficult.”

“It was hard to bond with her the same way that I did with the other kids just because she was so fragile we didn’t know what was going on,” Meghan said.

Siena remained in the NICU for a few weeks until her parents learned about her genetic diagnosis.

According to Siena’s mom, they then spoke with her doctor’s to put her on palliative care. Siena’s doctors weren’t sure if she was going to make it, so they transitioned her to a specialty care facility, where family members were invited to say their farewells to Siena.

However, Siena had other plans. She started breathing fine on her own, shortly after her doctors said they weren’t sure she was going to make it.

“We’ve decided in our house that ‘plan’ is definitely a four letter word that we’re not allowed to say anymore because every time we make a plan, Siena has a different plan for us and for her, so she got stronger every single day,” Meghan said.

Once Siena was discharged from the hospital and sent home, Meghan and Daniel looked up early childhood intervention services online and discovered The Warren Center. They contacted The Warren Center to see if there was anything they could do for Siena. They brought Baby Siena to The Warren Center for an evaluation. At the time, Siena was still wearing full-leg casts for her clubfoot.

They were introduced to physical therapist, Sam, at The Warren Center. Meghan said Sam started Siena’s evaluation and began manipulating Siena’s body in ways that she and Daniel had not done before because they were trying to be delicate with her.

“I knew then that it would be the perfect fit. Sam was so confident. She was asking all the right questions. She was handling Siena in a way that, you know, even we probably weren’t at that time,” Meghan said.

“What struck me about Sam is how confident she was. It didn’t matter that Siena had this relatively rare diagnosis. She was just like, ‘this is what we’re going to do. This is what we need to do,’” Daniel said.

Siena also began receiving speech therapy at her home through The Warren Center.

A moment Siena’s parents will always remember was when Siena began smiling. Because Siena had low muscle tone when she first came home, she didn’t exhibit facial expressions right away. After working with The Warren Center for 10 months, they’ve noticed the corners of her mouth have slowly turned up a bit as she smiles at her parents and at Sam.

Meghan and Daniel began noticing Siena’s upper extremity and lower extremity strength has improved week to week while working with Sam. She’s now able to prop herself up with one arm, which is something she couldn’t do before working with The Warren Center. She can also now roll to the side and roll over on her stomach.

“We’ve always used the phrase ‘baby steps’ with all of our other children and it’s even so more the case with Siena,” Daniel said. “The steps are really small and it’s not going to be as large as our other children, but she is going to make progress and she’s going to have these improvements and it’s been a joy to watch.”

Meghan said being able to teach Siena new things, like sign language, has helped her and Daniel develop a stronger relationship with her.

“One thing that everyone at The Warren Center has helped inject at least into me is positivity and to just look past the diagnosis and see Siena for the wonderful human being she is, with the potential that she has now,” Daniel said.

“We are very blessed to be able to go anywhere we want for therapy for Siena and we chose The Warren Center and we will every single time. They have so many wonderful people there doing such a good job and it’s really a benefit for our whole family,” Meghan said.