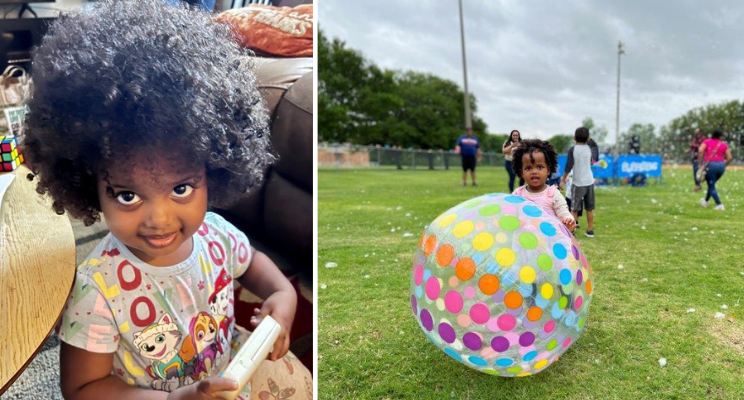 A toddler who’s been working with an early intervention specialist at The Warren Center has recently started the agency’s Bridge Group to work on her language and social skills.

Christian was born premature at 33 weeks gestation.  She was diagnosed at birth with HIE (Hypoxic Ischemic Encephalopathy) due to brain damage on the right side of her brain. She stayed in the neonatal intensive care unit for around 25 days.

Christian has received private physical therapy and occupational therapy before coming to The Warren Center to address weakness issues on her left side.  She was referred to early childhood intervention at The Warren Center for concerns about her speech. 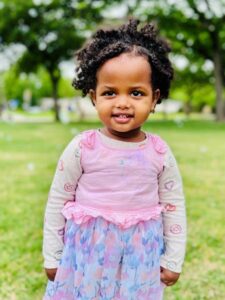 The toddler has been seen for specialized skills training (SST) services with an her early intervention specialist, Tina Sasser, since March to address her communication skills.  According to Sasser, Christian was very shy to begin with. Since starting services, she is able to identify people and objects and she can follow most directions given.  She is using some single words in English and Amharic and knows several animal sounds.

Christian started The Warren Center’s Bridge Group this month to work on language and social skills. Bridge Group facilitates the transition from the home to a structured, preschool setting, for children 32-36 months of age. During biweekly classes, therapists work with children to separate from parents more easily, transition smoothly between activities, participate in typical preschool activities (story time, music, snack, and crafts), and increase expressive and receptive communication skills.

Watch a video of Christian playing outside in Bridge Group in the social media player below.

Christian’s EIS and team members at The Warren Center have assisted her family with accessing resources like Salvation Army Angel Tree and giving them donated toys and clothing. The child has also been referred to the local school district to evaluate her skills for after she turns 3 years old. 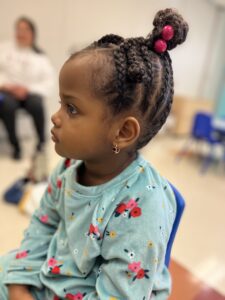