2-year-old plays with brother outside on adaptable car

You are here: Home » 2-year-old plays with brother outside on adaptable car 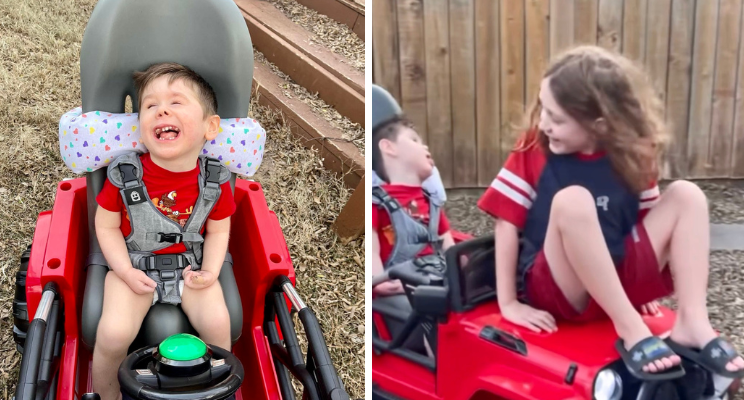 A 2-year-old boy is having the time of his life playing outside with his older brother on his new adaptable toy car.

In December, a software development company named EPAM Systems donated ride-on cars to four children who receive services from The Warren Center, including 2-year-old Freddie. The cars were adapted specifically for each child to use as part of physical or occupational therapy. With the help of therapists at The Warren Center, each child’s design was customized.

EPAM Systems has donated adaptable cars to nonprofits in the Houston area, but this is the first time EPAM has donated the Go Baby Go cars to families in the Dallas-Fort Worth area.

Each car took about a few hours to design. What makes the cars adaptive is the protective tubing around the back, a button on the steering wheel a child can press to make the vehicle go, and a seat belt. A parent also gets a remote control so they can control the car. The car has lights and a radio that plays music, too.

Freddie, who was one of the children to receive a car, has a diagnosis of Lennox-Gastaut Syndrome, which is a severe form of epilepsy. For the first two years of Freddie’s life, he was having frequent seizures, especially over the past year, and has spent much of his time asleep. Freddie has recently switched medications and is now awake a lot more often and has been more interactive.

Freddie has both hearing and visual impairments. He also has a history of cleft palate. Freddie is currently working on his head and trunk control and moving on the floor. He has just started lifting his head during tummy time, according to his physical therapist. His therapist says Freddie needs a lot of support to sit but is tolerating sitting well in his wheelchair or tomato seat, which is a chair that supports him in a variety of positions. He is also starting to tolerate his stander for short amounts of time.

His therapist, Sam, nominated him to receive the adaptable toy car.

“I think Freddie and his family would really benefit from a ride on car, as it gives them an opportunity to get Freddie outside and engaging in a fun way since they spend a lot of time in therapy and at appointments,” she told us. “It will also allow Freddie to work on cause and effect by using the switch to give him movement and allow for some increased vestibular input.” 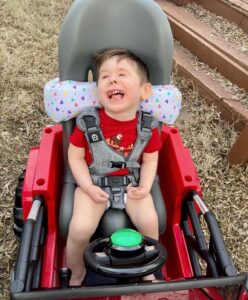 Freddie’s older brother, Charlie, said on the day Freddie received the adaptable toy car that “thanks to this gift, he can now finally play with his younger brother.” As you can see in the video below, the pair is doing exactly that. You can watch as they zoom around their backyard full of smiles.

According to EPAM Systems, they hope to design and donate more of these cars to children at The Warren Center in the future. EPAM currently has an Amazon wish list of items they use to build the adaptable cars. If you purchase items off of the wish list, they will be shipped directly to EPAM. Click here to view the wish list and donate.