Gadiel’s Story: Success in Communication Through Expertise at The Warren Center

You are here: Home » Gadiel’s Story: Success in Communication Through Expertise at The Warren Center 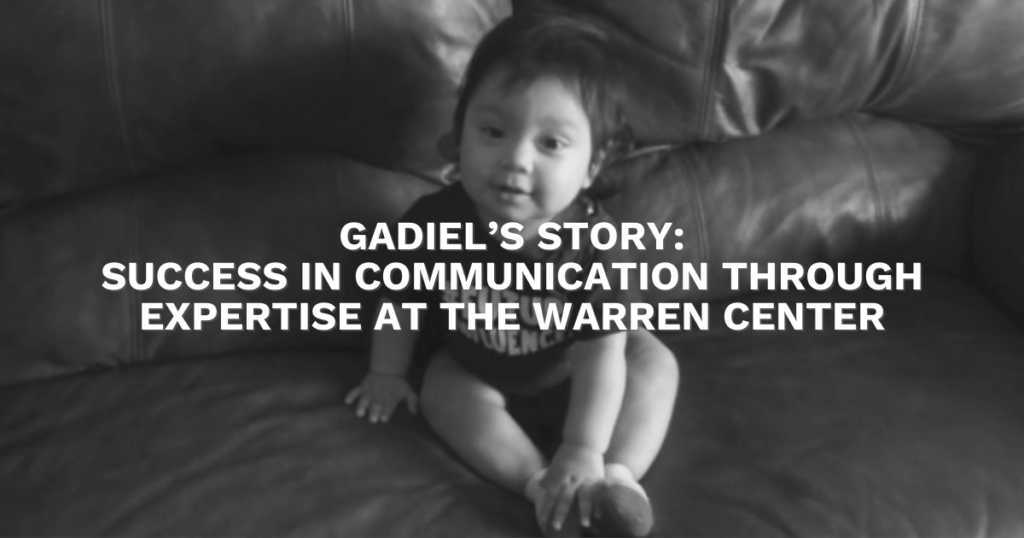 Success in Communication Through Expertise at The Warren Center

When a child has difficulty communicating, it can feel unnerving for a parent to determine how to give the child a fighting chance for success. And when there is a secondary language barrier, these difficulties can feel even more unsettling. As Esmeralda Sanchez saw that her son, Gadiel, faced challenges during the first five months in his life that could affect communication from the start, she was not sure where to turn. Fortunately, Esmeralda found that the experts at The Warren Center have the tools to help children communicate through even the most difficult circumstances.

Born prematurely at 31 weeks, Gadiel weighed about 2 pounds at birth and his condition would require that he remain in the hospital for 5 months. Due to his premature birth, Gadiel had not yet gained the ability to swallow, so surgeons inserted a G-Tube to feed him. “I cried all day because I couldn’t see him or be with him,” Esmeralda says regarding her son. “I know that he had probes and tubes. I was very scared that my son was going to die, and I had not been there with him.”

While Gadiel went on to use the G-Tube for 3 months, his family soon discovered there would be more hardships along the way. Following the insertion of the G-Tube, doctors observed that Gadiel could not defecate on his own and that there was a pre-existing hole in Gadiel’s intestine. Gadiel would need surgery to correct the condition. And while his intestines were out of his body in a bag, Gadiel underwent another surgery to enable physicians to set back the intestines.

Gadiel’s outlook improved once he began eating from a bottle, and he was allowed to leave the hospital after 5 months. However, this was only the beginning of Gadiel’s journey, and doctors knew Gadiel could benefit from experts to help him every step of the way. The doctor referred Gadiel to early childhood intervention (ECI) services at The Warren Center.

Finding a Voice to Speak

Esmeralda felt thrilled that her son qualified for help from a highly structured and bilingual program. She says, “When [the doctor] told me about The Warren Center, I was very pleased because I had already heard about that program.” She went on to explain that a representative at her older children’s school had already told her about The Warren Center before the doctor mentioned it. “So, when I found out that my son was going to receive therapy with The Warren Center, I was very excited since they speak Spanish, and they are very kind people.”

“The Warren Center and Sagrario has helped me a lot. Gadiel now makes a lot of sounds,” Esmeralda explains. “He says “Mama,” “Papa” [dad)] and “agua” [water]. He also says “mom-mom” (to request food). Gadiel is already eating solid foods and plays a lot with his toys. Sagrario taught me how to help him.”
The help and care from The Warren Center far exceeded any expectations. Esmeralda explains that Sagrario went above and beyond to answer all questions and provide guidance on Gadiel’s development. She notes that The Warren Center has helped her understand developmental milestones and become a more responsible parent

Upon transitioning to Teletherapy due to COVID-19, Esmeralda worried about therapy using an online platform because her and her son had grown accustomed to the therapist coming to their home. However, Gadiel adapted quickly, and Esmeralda feels confident that she can continue to help him develop his verbal and nonverbal skills.
“The Warren Center gives you confidence,” Esmeralda says. “Without Sagrario, I would not have been able to help Gadiel with his special needs. The Warren Center is the best thing that could have happened to me and my family.”

Copyright © 2021 The Warren Center All Rights Reserved.
*All stock photography used on this website is for portrayal only and does not reflect the actual health or condition of the model.*
Site by Reklaw Design
MENU